Around the house somewhere is a photo of me (taken by the Other Half) taken outside the Stonewall Inn during the Stonewall 25 celebrations in New York. That was a great up-all-night-in-the-streets party, and I'm sure this year is no different. One of my strongest memories of that weekend, however is of a moment of unexpected beauty the next day: being outside the bar as a group of young people danced up and down the street carrying an enormous rainbow flag, and looking down to see the sun shining through the fabric and casting a multicolored shadow on the ground.

That beauty and their joy: that's what 'liberation' is all about. 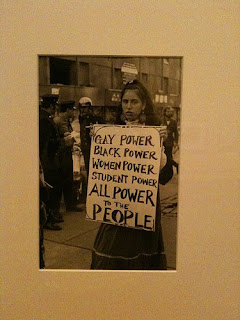 While the Stonewall Riots were not the first pro-gay disturbance, nor really the beginning of the Gay Rights movement (kudos, for example, to the founders of The Mattachine Society and its annual march in Philadelphia on July 4th, Frank Kameny and other in DC, and others in the 1950s, as well as to James Baldwin and Lorraine Hansberry for their writings in that decade, and to Richard Bruce Nugent for his short story Smoke Lillies and Jade in the 1920s) the Greenwich Village uprising, coming as it did in concert with the civil rights and Black Power movement and the women's movement, truly galvanized 'queers' all over the country. Too often we tend to forget that Gay Rights was part of an entire cultural uprising at the end of the 1960s. And too often, sadly, many in the movement have forgotten that that connection to other liberation movements.
(Thanks to John for an excellent post and the great image above from the New York Public Library's exhibit 1969: The Year of Gay Liberation)

Sadly, however, as much as things have changed, in some places in the country things appear to be still the same. For far too many young people "That's So Gay" is a slur. For all the positive images of gays and lesbians in the media, it still disturbs me how often we remain the 'comic relief' sidekick (but then I have problems with the depictions of African Americans and 'others' coming out of Hollywood also). Astonishingly, black publications covered LGBTQ events in the 1940's but seem to want to avoid them now. And sadly, our political leaders -- the President included -- seem more behind the times than the majority of the people when it comes to the issue of gay rights. A lot of hard work remains to be done.

The first time gay leaders were invited to the White House 32 years ago, they met a mid-level Presidential aide -- on a Saturday. Tomorrow, there will be a Stonewall 40 commemoration with the President -- quite a change, but we need and deserve more. Who knows how far along we will be in 4, or 40 more years.
Posted by Unknown at 11:20 AM