Now, to relax with a little Light Reading...

The First Litterateur stops at an Iowa City Bookstore to pick up a few things for the kids (“Journey to the River Sea” by Eva Ibbotson and “The Secret of Zoom” by Lynne Jonell) .... 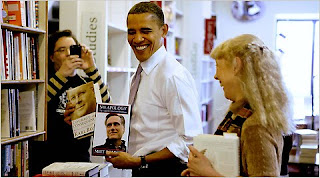 ....and from the looks of the picture, maybe some Fiction for himself?

Posted by Unknown at 5:35 PM No comments:

Never once in my life did my parents say, 'What you're doing is a waste of time.' ... I know there are kids out there that don't have that support system so if you're out there and you're listening, listen to me: You want to be creative? Get out there and do it, it's not a waste of time. — Michael Giacchino, after winning the Academy Award for best original score for 'Up'. 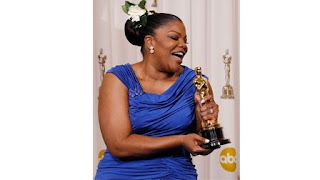 Congratulations to all of this years Academy Award Winners, to First Female Best Director Winner Kathryn Bigelow, and most especially of course to Baltimore's own Mo'nique for her ferocious performance in Precious. I wish her very much success in her stated desire to play Hattie McDaniel in a bio-pic in the near future Congratulations also to professor and screenwriter Geoffrey Fletcher for his win for Best Adapted Screenplay for his adaptation of Sapphire's novel Push. He's the first African-American to win a writing Oscar, and gives all of us scribblers of colour some hope!

This was the first time I'd watched the Oscars all the way through in a VERY long time (I'm not a fan of awards shows), and all in all I thought it was a very enjoyable evening. Most of the films and stars I suspected would win did in fact get their awards, and for me the only surprise was the selection of “The Secret in Their Eyes” (“El Secreto de Sus Ojos”) from Argentina over "The White Ribbon" or "A Prophet".

Pre-and Post Oscar, however, things have been less predicable and rather interesting. For example, Mo'nique set off a bit of a firestorm by revealing that she and her husband have an open marriage.

Considering the reaction of some people to this 'revelation' (which was old news to New York Times Readers) one would think Mon'ique had confessed that she and her husband spent their spare time as serial killers. 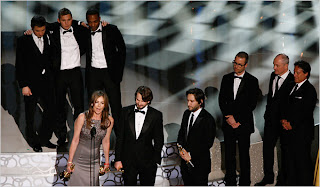 Secondly, the closeness of the stars of the Best Picture Oscar winner The Hurt Locker, provoked this bit of strangeness from NBC Today show co-host Meridith Viera:

Visit msnbc.com for breaking news, world news, and news about the economy

Both these instances point out ways in which conformity particularly in issues relating to sex and sexuality continually rears its ugly head. Some people feel the need to police other people's relationships, and or their expressions of warmth, affection, and love. Dominant forms of 'acceptable heterosexuality' must be enforced at all times! And as the author of the "Good as You" blog points out, this kind of reaction is particularly disturbing for gay and lesbian people when it comes from one of our so-called liberal allies, as Viera has been in the past:

'"Because we have so many of our supposedly liberal friends who will be so nice to our lives and our loves when confronted directly with them, yet will so often go for these cheap and, frankly, stupid jokes that traffic solely in anti-gay "worry." In doing so, they foster the idea that same-sex affections are icky, a fear fomentation that's not negated by their niceties when dealing with actual gay people. Regardless of how much the purveyors of this mindset may disconnect these abstract denunciations from actual LGBT human beings or contribute to our cause, the reality is that they're cultivating in the minds of the American public the exact kind of casual heterosexism that keeps people voting against us and then justifying it by saying "some of my best friends are gay," keeps civil unions on the table as acceptable alternative to full marriage equality, and keeps many would-be allies apathetic to the pro-equality fight because they see gays as this odd "other." '

Personally, as someone who has played on sports teams, been in the military, and been through very stressful and sometimes traumatic events with other guys, I didn't see anything particularly 'gay' about the way these actors reacted or were all hugged up on each other. In filming Hurt Locker they experienced a small part of what soldiers on the front lines are experiencing in Iraq and Afghanistan, and one that can create an incredible bond. To make that seem somehow 'wrong' or a 'reason to worry' is in itself a reason to worry about the person who feels that way. So...what's up Meredith?

Although the following poem is old, and written for another occasion, I offer it in honor of all the winners, and urge everyone to express their affection for others however they damn well please.

Our only enemies are Time,
the unending fall of each
hundredth of a second, and the Air
which holds us back, keeps us from
transforming to pure flight
not those others talking trash.

We do not need words, have caged
Speed itself within the bunched muscles
of our thighs, feel it purr beneath our feet
coiled tight, ready to spring
out with the sharp crackling of a shot.

We train as one, live as one,
push each one on with shared
determination, pull each fiercely
over every finish line.

Awash in applause and screams
beneath a flag too small
to contain all that we are,
this final lap of victory is shared: mine,
my brothers. When I win
he wins, we all win – all swim arm in arm
in glory.

Shirtless in the flashbulbed night,
our bodies gleam with muscles, sweat
and speed, hammered bronze turned
gold in the liquid light of our tripled love. 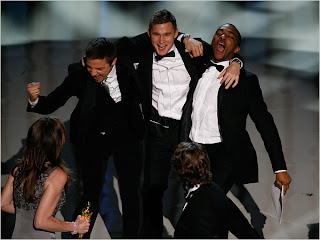