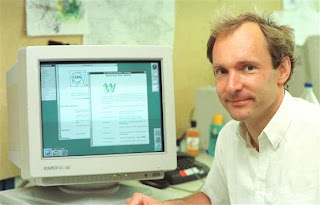 Twenty years ago this month, something happened at CERN that would change the world forever: Tim Berners-Lee handed a document to his supervisor Mike Sendall entitled "Information Management : a Proposal". "Vague, but exciting" is how Mike described it, and he gave Tim the nod to take his proposal forward. The following year, the World Wide Web was born.
Posted by Unknown at 9:08 PM 1 comment:

I recently had a conversation with a couple of other poets and writers where we talked about an article in The Chronicle of Higher Education on the 'inflation' current poets reputations. The author bemoans the fact that nowadays no poet wants to call another poet mearly 'adequate' -- or worse. Everyone has to be 'significant' in some way -- just in case they prove to be someone who History will prove to be still read and important fifty to one hundred years from now.

I say this in prelude to talking about the very sad news I got today about the passing of the thirty-something black gay poet Shelton Jackson. Author of three self-published books of poetry, I doubt that Shelton will be remembered as A Poet of the Ages. I also seriously doubt that he really would have cared about that. For him, poetry had a highly theraputic function: he wrote as a way to deal with his life as a black, gay, HIV+ man in his 20's, to look back on his past with honesty, and also as a way to map out a future as well. He also used his example and his work, to urge a greater openness among other young African Americans around issues of sexuality and health. These may not be things that matter to literary posterity; they did, however, make a difference in individual lives.

It could not have been easy for him here in Baltimore, to be an 'out' gay man at Morgan University. Like most HBCU's Morgan is very closeted: There are gay students, faculty, administrators and staff there; 'everyone knows this,' but it is not something that is talked about. To be Out there, even now, is to almost ensure being ostracised and marginalized. Shelton, bless him, refused to pretend to be something he was not.

Although we met face to face only a few times, I'm deeply saddened by this young man's passing. He was a very sweet, dear young man, and this just seems so....unfair. He had already faced down more challenges than most young people his age. It angers me that his life was cut so terribly short. He was still growing, developing, maturing. I'm stunned and hurt that he won't be around to help others and further develop his talents.

His myspace page
Posted by Unknown at 10:22 PM 3 comments: 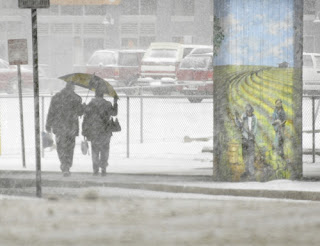 As we on the East Coast dig out from last night's snow (and the ensuing panic some folks here go through...amazing!) some links to recent articles that I've found of interest.

Some Essential Reading on the current financial crisis, from my favorite blog, JD Roth's Get Rich Slowly

For you visual learners, The Crisis of Credit Visualized

I also found this quote from a recent post on The New Yorker's website 'disturbing' to say the least (and, yes, friends do call me The King of the Understatement):

Many of the country’s biggest banks are in deep trouble — many are technically insolvent, or “upside down,” as they say in the household-mortgage sector — but have not yet been forced to reckon fully with their insolvency. I heard a senior Administration official remark that seventy-five per cent of the country’s banks are probably upside down.....

Tell me again what's wrong with Nationalization? And how that's worse than throwing good money after bad over and over again like we're doing now?

The Baltimore Sun's Jay Hancock on Why The Dow Doesn't Matter.

And speaking of that, even though the Market took a dive today, amazingly enough there are still companies whose stock is now double what it was in 1996 (Obviously someone has to gas up and get something to eat at Mickey D's and the gas station before picking up that computer at Wal-Mart).

This wonderful primer "How to Write about Africa" by Kenyan author Binyavanga Wainaina, also echos many of the ways other People of Color have been written about by 'mainstream' writers. (Make sure you show how Africans have music and rhythm deep in their souls, and eat things no other humans eat....Taboo subjects: ordinary domestic scenes, love between Africans (unless a death is involved), references to African writers or intellectuals, mention of school-going children who are not suffering from yaws or Ebola fever or female genital mutilation...Establish early on that your liberalism is impeccable, and mention near the beginning how much you love Africa, how you fell in love with the place and can’t live without her.... Hmm...where have I heard something like THAT before?)

Of course, all this madness has ended now that we're in the Age of Obama, right?

And speaking of The President

Zadie Smith shows she is not only a wonderful novelist, but also an amazing critic and essayist. Her take on Obama and being "double-voiced" (as so many of us are) if flat out extraordinary.