Like many same-sexers, I'm none too pleased by the choice of the Rev Rick Warren to deliver the invocation at next month's inaugural. The President-Elect defended the choice today, saying

I think that it is no secret that I am a fierce advocate for equality for gay and lesbian Americans. It is something that I have been consistent on and something that I intend to be consistent on during my presidency. What I've also said is that it is important for American to come together even though we have disagreements on certain social issues. I would note that a couple of years ago, I was invited by Rick Warren's church to speak despite his wariness that I held contrary views.... that's what this campaign was about....We're not going to agree on very single issue...but what we have to do is be able to create an atmosphere that we can disagree and not be disagreeable....

Well, Okay Barack...but as my partner said this morning, there has to be a limit to all this "Team of Rivals" stuff. And let me be clear: I'm not only disapointed because of Warren's support for California's Proposition 8, but also because of his position against a woman's right to choose as well. If a minister had said "I don't believe black and white people should be able to get married" (and you know I'm not a fan of the "Gay=Black" formua) or, "I don't believe a woman has the right to control her own body" -- how 'agreeable' would we be toward someone with these views?

As The Atlantic's Marc Ambinder points out, some of us have been here before (Remember Donnie McClurkin?)....

One reason the Rick Warren thing is a big deal to gay rights activists is because, after their experience with President Bill Clinton, the gay community is unusually sensitive to getting the shorter angle of presidential triangulation....

Clinton was willing to say the word "gay" in public and appear in black tie at the Human Rights Campaign dinner, but, in the eyes of the gay political community, his commitment to gay rights vanished both times it counted most.

Relative to other minority groups, the LGBT community is disproportionately dependent on the goodwill of the president, because almost all of their big-ticket agenda items are federal laws (the military, DOMA repeal, hate crimes, ENDA, the Permanent Partners Immigration Act, etc.). And relative to other minorities, gays still want and need basic reassurance that they are an ordinary part of American life and politics. So everyone is peering anxiously at Obama wondering if he is going to let them down like Clinton did.


Huffington Post offers differing views on 'What Now/What Next'

Lee Strnanahan: There's something bigger at play here and you can't say Obama didn't warn you. He talked about reaching out, about expanding our politics and that crazy bastard actually meant it. Nobody on the left or right quite knows what to make of it. We want to cram Obama into our old, divisive, two toned ideological and political frame and if he doesn't fit, we'll attack him too. Attacking is what we're used to doing.

Jon Hoadley: If we want to enact pro-equality policy and change, we need to take a page out of Harvey Milk's playbook: we have to give them hope. We need to say what we want, not just what we don't want.

Oh, well, I guess it's 'only a prayer.' And perhaps you'll get some goodwill cover for some of your more controversial choices that would upset the Right. At least the rest of the January 20th program looks like it will be great.

Call to Order and Welcoming Remarks
The Honorable Dianne Feinstein

Oath of Office Administered to President-elect Barack H. Obama
By the Chief Justice of the United States
The Honorable John G. Roberts, Jr.

Inaugural Address
The President of the United States, The Honorable Barack H. Obama 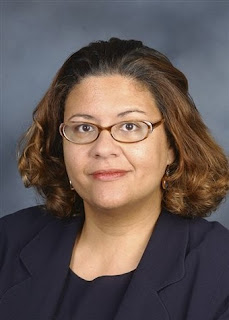 Today's choice of Elizabeth Alexander as Inaugural Poet shows not only great poetic taste, but also that you read my blog as well Thank you, sir, I'm honored...(okay so I had Patricia Smith for Poet and Elizabeth for NEA Chair, but, still...).

And, uh, in case you were wondering, yes, I am available to join your team as either White House Poet in Residence, or IT Librarian of Congress....either/or, sir, not a problem: I'd love to say (a la The West Wing) "I serve at the pleasure of the President of the United States"...

Poetry, I tell my students,
is idiosyncratic. Poetry

is where we are ourselves,
(though Sterling Brown said

for the shell that snaps,
emptying the proverbial pocketbook.

Poetry is what you find
in the dirt in the corner,

overhear on the bus, God
in the details, the only way

to get from here to there.
Poetry (and now my voice is rising)

Poetry (here I hear myself loudest)
is the human voice,

and are we not of interest to each other?

Elzabeth Alexander
Posted by Unknown at 3:23 PM No comments:

Can it really be 20 years we've been commemorating World AIDS Day? Sweet Heavens.... 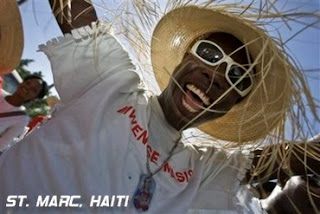 In honor of the day, and of the brave, openly gay men who marched in Haiti today (thanks Rod 2.0), I offer this excerpt from poet Kwame Dawes' work on AIDS in Jamaica, parts of which appeared in the Spring 2008 edition of Virginia Quarterly Review

...For Jamaicans survival has always been a delicate and necessary art of deflection. We hear about a murder and go through a series of questions. Where was the person killed? The farther away from where we live, the better. Did the person fight back? Because I would never do that. Did the person have a big car the killer may have wanted? Was it the middle of the night? And the list goes on. Eventually, we find a reason why what happened could not happen to us. That’s not me; that could never be me. 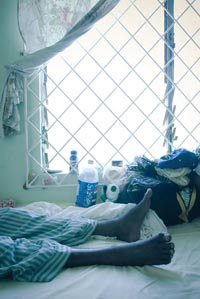 The same has been true for HIV/AIDS. As long as it was seen as a gay disease, heterosexuals could ignore the deaths. It could never happen to them. When news came that heterosexuals were dying as well, we came up with new questions. Did the person frequent prostitutes? Did he have sex abroad, or here with someone foreign? Was he promiscuous? Who exactly did she sleep with? Was it rough sex? Were they somehow perverse? Anything to keep the disease far away, to pretend it could never reach us. But I can no longer live this way. In the months I have spent traveling around the island, this other Jamaica, going to towns I have not visited in years, meeting and listening to countless people, I have made friends—and now I have to accept that HIV/AIDS is a part of my life. I know that in time, I will hear of someone’s passing. I will hear of someone’s succumbing to the illness. I now live with it as a constant presence, not something I can simply deflect. And, fortunately, it has not destroyed the humanity of the people I now call my friends, but rather it taught all of us something about the frailty of human life—and something of our capacity to find hope in the midst of such struggle.


I also want to join the call for President-Elect Obama to appoint an "AIDS Czar" to create a national strategy in the government's fight against the disease. Either of the names mentioned in the Bay Area Reporter article linked above would be great (Dr. Helene Gayle, or Jesse Milan Jr), although, I think appointing the married, openly gay, HIV+ Mr. Milan would be extraordinary and be a pronounced break with the past on many levels.
Posted by Unknown at 5:28 PM 1 comment: