Head over to Ernest Hardy's blog for his excellent take on the troubled singer. Anything I could possibly say would only pale in comparison.

"We’ve so romanticized the tortured artist, been complicit in turning her/him into a blueprint pose and commodity, that we’ve forgotten there is sometimes painful truth at the root of the cliché: There are artists whose muse and round-the-clock demons really are one and the same. We, the herd of consumers, cheer the bad behavior, eat up the self-destructive actions, nod theatrically (so everyone around us can see) that we identify with the pain, maaaan. But we grow impatient when the artist who’s genuinely fucked up doesn’t act like a mercenary CEO, keeping just inside the lines of marketable debauchery and edible despair. We laugh and mock, made uneasy when it turns out shit is real. My writing this isn’t an attempt to excuse or glorify bad behavior or the selfishness of an artist showing up (over and over) too wasted to perform. It’s not meant to “enable.” It is an attempt, however, to recognize a broader context of issues (addiction; depression; creativity; the places where they meet) that are deserving of thoughtfulness and some measure of compassion..." 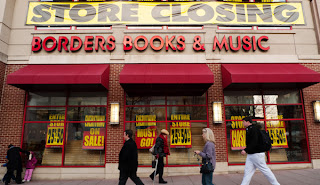 How ironic: My return to blogging coincides with the end of the Borders Bookstore chain (I had nothing to do with that, btw - except perhaps for tending to want to make most of my purchases from Independent and Used bookstores). While some are saying Borders brought this on themselves, whatever the reason, having one less place to purchase and browse, flip through magazines, hang out and loiter surrounded by texts is a very sad thing. For truly sometimes as much if not more is learned by seeing and accidentally running into those books that surround the item you want than from the particular book itself.

As much as I often repeated the joke "Millions of books - except the one you want" while talking about the big box stores, their range and variety is far greater than what is replacing them in the 'non-virtual world.' A quick (and it will be just that - quick) look at the offerings on the bookshelves at Target, Wal-Mart, or Costco is enough to make most writers slit their wrists.

The big box stores, and these new brick and mortar venues for books (I'm tempted to say "Bric a Brack" venues!) hide the amazing vibrancy that's going on in small press publishing now. There has been some very sad news - the University of California putting it's amazing New California Poetry Series on hiatus as that institution faces uncertainty about its budget, for example - mixed in with some very pleasant surprises, like Akashic Books' unexpected Best Seller "Go The F*ck to Sleep." (Click here for - who else?- Samuel L Jackson's pitch perfect audio version). 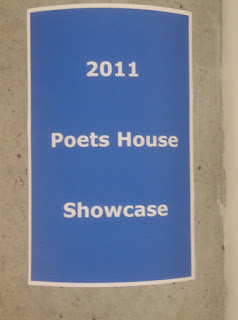 Here at Poets House, for example, we're wrapping up the month-long Showcase, an annual event where we display what we hope are all the poetry books published in the US over the past year. This July we are showing 2,458 books from 767 publishers around the country. This includes broadsides, chapbooks, poems published as matchbooks, and in other unusual configurations.

Most people when they see the Showcase say "I never knew there was this much poetry!" and it is true. In most bookstores, the sales of poetry are so small that it doesn't make financial sense to carry a lot of it. But that hasn't stopped writers from writing or publishers from putting out their work. Nor has the e-book revolution hit this segment of the writing world too hard - yet - mainly due to problems with formatting poems. Once that's been fixed, all bets are off). 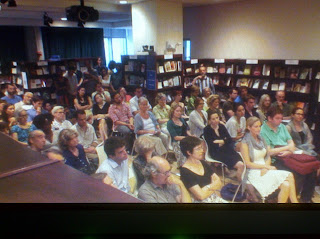 We were also fortunate to host a celebration of the 75th Anniversary of the astounding independent publisher New Directions here as well, somehow managing to pack around 200 people into both levels of our space (read John K's recap of the event here). I recognize that New Directions is an 'outlier' and that more often than not independent publishers don't make it for very long. But the fact that an uncompromising and defiantly literary enterprise like New Directions has made it - and that others, like Haki Madhubuti's Third World Press, for example which has lasted for 44 years, have done so as well - has to help to reduce one's level of despair. 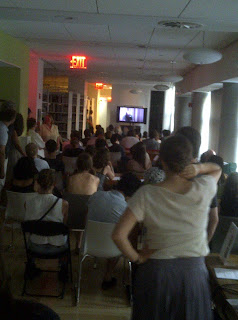 Sometimes I think, as far as the Book Biz is concerned, we are living through times similar to the last days of the dinosaurs. The small presses are like the early mammals, running around while the huge lumbering (corporate-owned) majors flail around wondering how - or if - they are going to survive. To the small, fast and nimble goes the race -- I hope!

"New Directions was founded to counteract, in its small way, the tendency to treat a book as nothing more than a package of merchandise. Perahps the editor is an idealist. But that species is not yet extinct. Our first years have shown there are a great many people in this country who love the best in literature and resent its degradation. Confident of their support and anxious to deserve it, New Directions enters another publishing year." - James Laughlin, 1939
Posted by Unknown at 6:55 PM No comments: