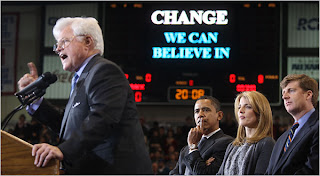 And La Morrison herself endorses Obama 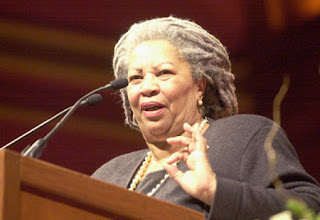 I have admired Senator Clinton for years. Her knowledge always seemed to me exhaustive; her negotiation of politics expert. However I am more compelled by the quality of mind (as far as I can measure it) of a candidate. I cared little for her gender as a source of my admiration, and the little I did care was based on the fact that no liberal woman has ever ruled in America. Only conservative or "new-centrist" ones are allowed into that realm. Nor do I care very much for your race[s]. I would not support you if that was all you had to offer or because it might make me "proud."

In thinking carefully about the strengths of the candidates, I stunned myself when I came to the following conclusion: that in addition to keen intelligence, integrity and a rare authenticity, you exhibit something that has nothing to do with age, experience, race or gender and something I don't see in other candidates. That something is a creative imagination which coupled with brilliance equals wisdom. It is too bad if we associate it only with gray hair and old age. Or if we call searing vision naivete. Or if we believe cunning is insight. Or if we settle for finessing cures tailored for each ravaged tree in the forest while ignoring the poisonous landscape that feeds and surrounds it. Wisdom is a gift; you can't train for it, inherit it, learn it in a class, or earn it in the workplace--that access can foster the acquisition of knowledge, but not wisdom.

When, I wondered, was the last time this country was guided by such a leader? Someone whose moral center was un-embargoed? Someone with courage instead of mere ambition? Someone who truly thinks of his country's citizens as "we," not "they"? Someone who understands what it will take to help America realize the virtues it fancies about itself, what it desperately needs to become in the world?

....There have been a few prescient leaders in our past, but you are the man for this time.
(Full Text Here)
Posted by Unknown at 5:51 PM No comments:

ONLY because I love Ms Jones am I doing this! I'm not a chain mail/meme kind of person. But She Asked, and so I Answer....


February 2007
Black Gay History Month for the NBA
Too much has been happening here in the past month for me to do much blogging, but I did want to sneak in a brief post to say....

sorry
the weather has been
so warm and clear.

I will try
to do better
soon

I recently had the pleasure of teaching a workshop at Coppin State University, and one of the students in the class asked me a question.

I purposefully took a copy of writer Barbara Ehrenreich's new book, Dancing in the Streets, along when The Other Half and I went on a recent visit to Chicago, because I knew I would see its subject in action.

July 2007
Carrying On
I am very pleased to be part of this project.

A fond farewell to the Great Tenor (and hero to 'men of size' everywhere).

October 2007
Quote: Michael Palmer
As Octavio Paz notes, the poem is alive only when the reader opens the book; until then it is nothing, it is waiting in the dark.

Back from a whirlwind trip to Minneapolis, Minnesota. I guess if Garrison Keillor can come to Baltimore, I can go to Lake Woebegon!

It's been a while since I've posted a poem, and thought I'd put this up, since the subject of translation has been one some friends and I have been discussing recently
Posted by Unknown at 4:56 PM No comments: 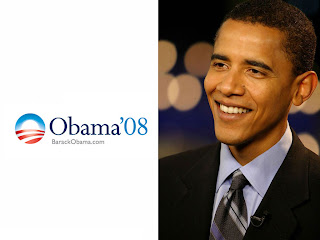 Since the Iowa Caucuses, I've been trying avoid Mr. Greenspan's "Irrational Exuberance". It's early, there's a long way to go, he's still a Black Man in America, and to be honest, before those returns came in, the Other Half and I were discussing why a state that really is pretty unrepresentative of the rest of the nation in many ways got to be so darned Important.

Ask me about the issues, and I really should be voting for Dennis.

And if there's a lesson to be learned by the results in New Hampshire, it's that sometimes polls don't mean a thing...

But still, I'm sorry, I can't contain myself. In point of fact, even with Hillary's win in New Hampshire, I remain, well....kinda giddy! I've already had the dream of loading all our nieces and nephews into the car and heading to DC on January 20, 2009, to be there in person when History is made...

Obviously I need a cold compress and a little lie down.

(And I'm ignoring the fact that, if Hillary wins, History will STILL be made)

The old Political Science Major in me is making a comeback. This is turning out to be the most exciting primary season I can remember. The Republicans might go into their convention without a clear winner (a smoke-filled room alert will soon be issued for Minneapolis). Hill & Bill could be trading primary's with Barack up to Super Tuesday (I've heard pundits start to call it Tsunami Tuesday, which strikes me as really insensitive)

It's also amazing, in this age of sound-bites, that people are responding to Obama's speeches. Eloquence on the campaign trail? Unheard of (Rev. Mike Huckabee has a bit of this as well, I think, as well as an ability to engage people on both a personal and intellectual level, which is another reason why Iowa was so interesting). I've often said on a local level that one of the things missing here is someone able to give Baltimore residents a vision of our future, someone that could make us dream of something better, and make us long to achieve it. Obama is doing this on a national level. Everyone else seems bogged down in detail, while he soars above it all.

A bit disconcerting -- man and woman do not govern on "The Vision Thing" alone -- but it is essential. And the correct kind of a vision, and embracing one, is important as well.

Plus, the man can write pretty well also.

Yeah, I'm late for the bandwagon. Yes, I am "one of THOSE Negroes who waited to see if white people would vote for a black candidate." Sue me.

See you in DC, Barack!

Kathleen Hall Jamison on Iowa -- and against the Zero-Sum Game analogy in politics. Moyers/Jamison will be a weekly must in our household for the rest of the campain.