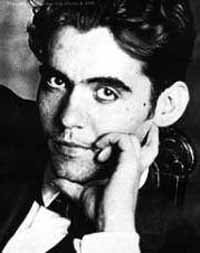 August 19, 2006, was the 70th anniversary of the assassination of Spanish poet and dramatist Federico Garcia Lorca. Murdered by fascist troops during the early stages of the Spanish Civil War, this world-class writer and activist was only 36 years old. I first encounterd Lorca's writings in high school, and his work was one of the 'gateway drugs' that started me off on my continuing love of poetry. I also remember, back in high school, a group of teachers talking about him, and in talking about his death, one said contemporaries were not sure if he was killed 'por eso o por el otro' ('for this or for that' -- literally 'for this or for the other'). There was a quiet, slightly uncomfortable moment in the teacher's room, as no one wanted to come out and make explicit in front of the 14 or 15 year old me what the phrase referred to (but what I'd already either known or had suspected): the question of whether he was killed because of his politics or because he was a gay man.

Of course today is also the anniversary of one of the greatest tragedies to befall this country, the horror of what happened when nature's fury met political incompetence and social indifference, and wind and water ripped the covers off the dream world most Americans live in and forced them to see what things are really like for so many people in this country, which we call "Katrina." 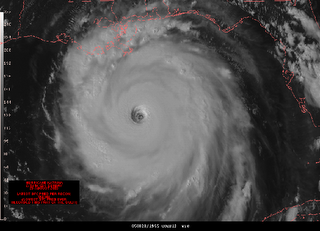 News organizations and others are marking this anniversary, and the politicians are once again trooping toward the Gulf Coast for press conferences and photo ops. New Orleans and the Gulf hold a special place for me. I was in the US Coast Guard, stationed in Mobile, Alabama, for two years, and spent part of that time in cities along the Gulf, from Passcagoula and Biloxi, Missississippi, to New Orleans (when I had a three-day break, and the choice was staying in Mobile or riding on a bus for a couple of hours and spending the rest of the time in New Orleans...well, no offense, Mobile-ites, but I chose The Big Easy almost every time). I fell in love with New Orleans, and also fell -- hard -- for someone there. I was really too immature for a serious relationship, sadly, and like many people, only realized how special what we had was until after it was over. 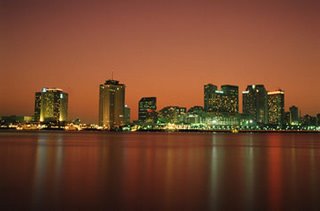 So I have strong, complex, emotions when it comes to New Orleans. It is one of my favorite US cities, in part because being there has always felt like NOT being in the United States, but in another world. It was summer, humid and rainy, the last time I was there, and I made notes for a poem about the place and my feelings, watching the city's and my own histories collide, mesh, and swirl as the rain splattered the car's windshield, and in my notes I called it an 'aqueous city'. Now, of course that phrase has yet another meaning. 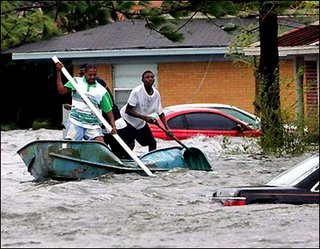 One of the great failures post-Katrina failures to my mind is our failure of vision. As appalled as I was by what happened (and didn't happen -- and hasn't happened yet), I am most dissapointed and infuriated by the lack of realization by the powers that be that we have also been handed an amazing opportunity. How many times have we been able to rebuild an entire city? The last time was around the turn of the last century, from, the 1871 Great Chicago Fire to the 1904 Baltimore Fire to the 1906 San Francisco Earthquake, there were an unprecidented series of disasters befalling American cities, leading to the need to rebuild. Citizens and city planners got together and transformed these cities, creating the outlines of the great metropolises we see and live in now. 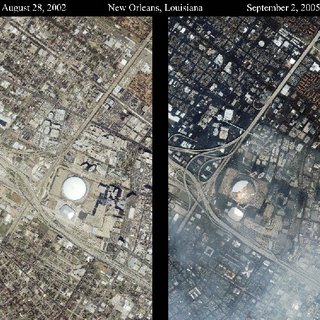 Katrina should have been another one of those opportunities, a call for planning, innovation -- and vision. I've always thought there should have been a blue ribbon planel of architects, environmentalists, developers, city planners, private citizens from all walks of life and economic levels, business people, and politicians brought together to discuss the future of New Orleans and the Gulf Coast. How do we build a city below sea level? What can be done to minimize the impact of storms to come (the Weather Channel is on as I type this, with reports on Ernesto in Florida)? What kind of life do we want to create for the citizens of Louisiana, Missississippi, and Alabama? Yes, rebuild, yes, restore and strengthen the levees, yes bring back The Saints and Mardi Gras. But who is thinking about the future? Where is the vision? Who is talking about the possibilities offered to us as we rebuild? Certainly not Our Current President, who continues to spout platitudes. But someone has to do this. Someone, somewhere has to be able to dream -- and then go to work.

Oh yeah, we're using our "Vision" to rebuild Iraq. And as this is also the one year anniversary of the cliche 'Playing the Blame Game' I really should leave Dubya alone. Yeah, right...
(the only people who use that Blame Game phrase were folks trying to run away from responsibility. IMHO there was and continues to be enough responsibility/blame to go around).


In honor of Lorca and The Gulf, here's the final section of the poem "New York (Office and Denunciation)" from the collection Poeta en Nueva York which seems especially appropriate today.

I also CANNOT RECCOMEND HIGHLY ENOUGH Spike Lee's masterpiece When the Levees Broke: A Requiem in Four Acts. It is absolutely essential viewing, and should be seen by everyone.

I denounce all those
who never think of the other half,
the irredeemable half,
who raise their mountains of concrete
where the hearts of little
forgotten animals beat
and where all of us will fall
in the final fiesta of jackhammers.
I spit in your faces.
That other half hears me,
eating, pissing, flying in their purity,
like the supers’ children
who take their flimsy palettes
to the holes in spaces where
insects’ antennas are rusting.
This is not hell, this is the street.
That is not death. That is the fruit stand.
There are broken rivers and distances just out of reach
in the cat’s paw smashed by a car,
and I hear the song of the worm
in the hearts of many young girls.
Rust, fermentation, earth tremors.
You yourself are earth drifting among numbers in the office
What am I going to do, put the landscapes in their right
places?
Put in good order the loves that soon turn into photographs,
that soon become pieces of wood and mouthfuls of blood?
No, no: I denounce,
I denounce the conspiracy of these deserted offices
which erase the plans of the forest,
and I offer myself as food for the cows milked empty
when their bellowings fill the valley
where the Hudson becomes drunk with oil.

Posted by Unknown at 7:54 PM No comments: