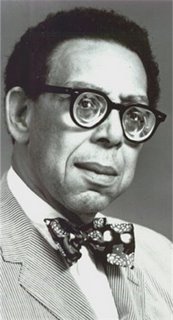 A: Because I prefer it to prose, for one thing. Because, for another, I'm driven, impelled to make patters of words in the special ways that poetry demands. Maybe whatever it is I'm trying to communicate I can most truthfully express in poems. I think I have other reasons, too. At best, though, I can only make very tentative statements, and they're subject to change without notice. I suppose I could say, without fear of contradicting myself later, that writing poetry is one way I have of coming to grips with both innner and external realities. I also think of my writing as a form of prayer -- a prayer for illumination, perfection. No, I'm not satisfied with any of this. It's all beginning to sound pompus, highfalutin, but it's about as close as I can come to an answer. Most poets don't consciously analyze their reasons for being poets anyway. One doesn't choose to be a poet any more than he chooses to be born. If one could answer the question, "Why do you go on living?" then perhaps one could come up with a convincing answer to "Why do you write poetry?"


Even worse than being a bad blogger, I've also been a 'bad poet', in not paying my respects to April's National Poetry Month before now. Well, better a touch late than never.

To celebrate, here's a poem by one of my all-time favorite poets (and one who has had a considerable influence on my generation of African-American poets), Robert Hayden. As much of his work does, it simultaiously takes my breath away, breaks my heart, and speaks to me on many different levels.

I gaze at you,
longing, longing,
as from a gilt
and scarlet cage;
silent, speak
your name, cry --
Love me.
To touch you, once
to hold you close --
My jungle arms,
their prized chimeras,
appall. You fear
the birds-of-paradise
perched on my thighs.

Oh to break through,
to free myself--
lifer in The Hole --
from servitude
I willed. Or was
it evil circumstance
that drove me to seek
in strangeness strange
abiding-place?
Born alien,
homeless everywhere,
did I then choose
bizarrity,
having no other choice?

Hundreds have paid
to gawk at me --
grotesque outsider whose
unnaturalness
assures them they
are natural, they indeed
belong.
But you but you,
for whom I would
endure caustic acids,
keenest knives --
you look at me with pain,
avert your face,
love's own,
ineffable and pure
and not for gargoyle
kisses such as mine.

Da Vinci's Last Supper --
a masterpiece
in jewel colors
on my breast
(I clenched my teeth in pain;
all art is pain
suffered and outlived);
gryphons, naked Adam
embracing naked Eve,
a gaiety of imps
in cinnabar;
the Black Widow
peering from the web
she spun, belly to groin --
These that were my pride
repel the union of
your flesh with mine.

I yearn I yearn.
And if I dared
the agonies
of metamorphosis,
would I not find
you altered then?
I do not want
you other than you are.
And I -- I cannot
(will not?) change.
It is too late
for any change
but death.
I am I.