Blog toward A Poem about Love


One of the poems I read at Sunday's very wonderful reading at Minas. This will soon appear in the new anthology from New York's Other Countries collective (thanks Glenroy)


Notes Toward A Poem About Love

Remember:
The long trip back from the Carolinas –
how he looked, smooth in silhouette dozing

you drove 80 miles an hour from Durham to DC
through a rain-slicked, receding South
deep in a groove, desperate for return for shared, familiar bed

or earlier the night before the downtown Charlotte club –

How, even dressed in 'b-boy hoodlum mode'
he was glorious, shone a beacon in the smoky dark.
New Man in Town, undressed by the eyes of Sunday regulars

confused by this bastard busting their games
the half-seen other he leaves with;

or later, even: Picture the future, next week, tomorrow–

On the phone, he laughs at a joke and his gaze turns,
ablaze with anticipated retelling.

At the Podium again 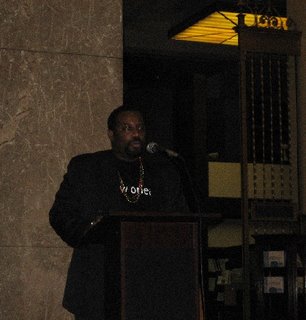 I'm reading this Sunday (November 19th) with Nicole Pekarske at Minas and Peggy's wonderful Minas Gallery in Hampden. Rumor has it, I'm reading "new work," never before heard within the confines of Baltimore City. I hope I'm feeling better and less conjested than I do now otherwise it'll be short ... and none too sweet!
(and thanks in advance, Aaron, for the mention on WYPR's The Signal this Friday)
Posted by Unknown at 12:20 AM No comments: 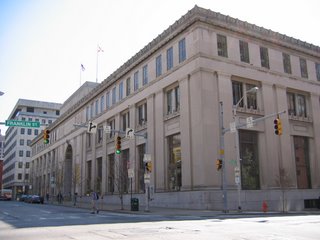 Sometimes its really quite amazing to work here. 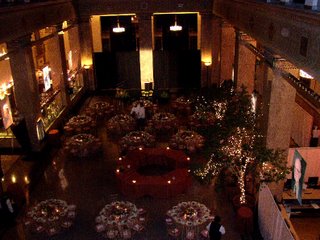 Last week our central hall was transformed into an elegant supper club for the Pratt Society Dinner. This annual function recognizes individuals and organizations who have donated $1000 or more to the Library and its programs. The centerpiece of the evening is the awarding of the Lifetime Literary Achievement Award to a distinguished author. Past awardees have been Alice Walker, John Updike, Joyce Carol Oates, Saul Bellow, Toni Morrison, Tom Wolfe, Norman Mailer and Barbara Kingsolver. This year the award went to one of my favorite authors, E. L. Doctorow. 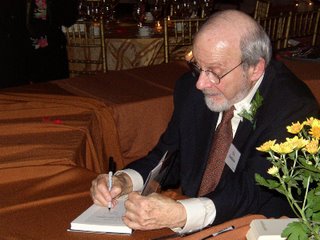 As manager then supervisor over the work of the Pratt Center for Technology Training, I've attended about half of these events (the Walker, Morrison, Wolfe, Mailer, Kingsolver -- who was, somewhat unexpectedly to me, fantastic -- and now Doctorow evenings), getting a chance to ask Mailer about boxing ('not too interesting' since Ali's retirement), for example, and sheepishly asking La Morrison to sign my arm load of her works ("I'm sorry to impose...." I started to say. "No you're not," she replied, motioning to me to set the books down, "Come on." We then tried to figure out if she knew any of my Other Half's family back in their native Ohio)

And it's always amazing to see this soon-to-be 75 year old building looking like a million bucks. 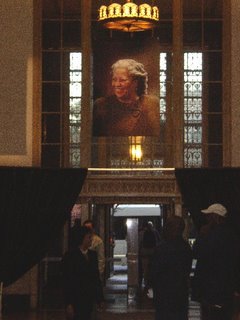 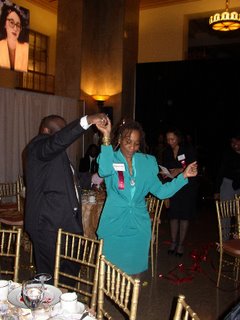 Melissa Carter and Daryl Jeffries of the Development Office kick up their heels in a post-dinner dance.
Posted by Unknown at 12:15 AM 1 comment:

Thank You and Good Night 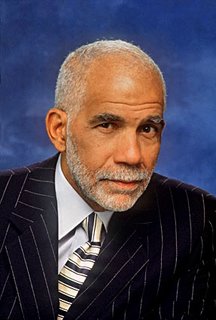 "My formula for success has three elements: the talent you're given, the hard work you do to get better at whatever it is that you do, and a certain amount of luck. And I always found that the harder I worked, the better my luck was, because I was prepared for that. I will not go into a story unprepared. I will do my homework, and that's something I learned at an early age."

We lost one of the most polished and professional men in the world today, Ed Bradley of CBS News. I'm feeling bereft.

Thank you Mr Bradley for the years of reports and interviews -- and for showing us how to age with grace, beauty, and style. Just about every Black man I know wanted to be (or at least look like) Ed Bradley when we grew up (and we're still working on it!)

The Best of Bradley from CBS.com


Watch more video on the CBS News website, and see how what television journalism is supposed to be.
Posted by Unknown at 12:04 AM No comments:

So...it turns out the Democrats were right to start measuring the Congress for new drapes last week! What a Tuesday...Democrats take back both Houses in Washington, and you can hear the breaks starting to be pressed on the Bush Administration's fast track to disaster both hear and abroad. I could not be more pleased.

Arizona rejects a ban on Gay Marriage...but is sadly alone in that move.

Pennsylvania sends the evil Rick Santorum home -- where ever that is.

Rhode Island restores voting rights to those convicted of a felony

South Dakota says no to a total ban on abortion, while Missouri says yes to stem cell research.

And Dubya finally 'gets it' and shows Donald Rumsfeld the door. Of course, he admits that the decision was made toward the end of last week, and he saying Rummy was going to be at the Pentagon for as long as he was in the White House was perhaps a little white lie...

Since our first female Speaker of the House has a Baltimore connection -- does this mean the old pols will be gathering at Sabatino's again, just like in the good old days? 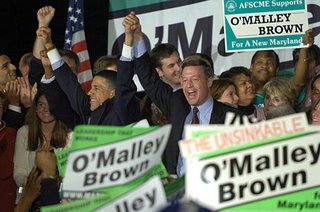 Here in Maryland, I and a number of others I've talked to were pleasantly surprised by the victory of both Martin O'Malley (shown here with new Lt Governor Anthony Brown) and Ben Cardin in their races for Governor and Senator respectively. Many of us suspected that perhaps Bob Erlich would be returned to Annapolis, but he too got caught up in the Blue Tide flooding the country last night.
(Interesting note here in Maryland: So long as your numbers are good in the more conservative counties to the East and West, if you win the I-95 corridor from Baltimore County to the Washington bedroom communities, you win the state) 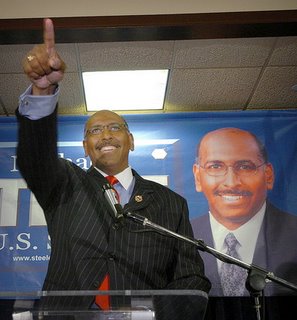 We also heaved a major sigh of relief over the loss of Michael Steele. Trying to position himself as an "Independent", and urging African Americans to vote for him just because he is Black, most didn't fall for it. Bravo us.

I noted with interest last night how some (white) commentators were attempting to access the meaning of the losses by black Republicans Steele, Lynn Swann in Pennsylvania, and Ken Blackwell in Ohio. Some were patting the GOP on the back for putting up African American candidates ("You found one! Good for you...."). To me their loss, and Patrick's victory in Massachusetts, shows a greater maturity on the part of the electorate when it comes to those running for office. Black and other voters pulled the leaver (or pressed the touch screen) for those who best represented their interests, not (just) because they looked like them. Or not.

Unless you happen to live in Tennessee. 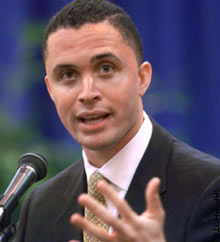 We all say we hate those attack ads on our TV sets, but the "Call me, Harold" ad seemed to have worked to remind viewers that yes, Mr Ford really WAS black, and they needed to lock up their blondes. Fortunately after his poised and classy concession speech, I'm pretty sure we've not seen the last of him. Although he's a bit too Conservative for my Socialist tastes, he should take a page from the re-elected (thanks to his shift to the left) Gubernator of California and say "I'll be back"
Posted by Unknown at 11:05 PM 1 comment: 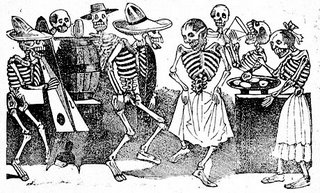 As John reminds us, it is All Saints/All Souls/Dia de los Muertos. And although he's not 'tagged' me, I'll counter his Octavio Paz poem with a Paz selection of my own, from one of my favorite books of all time, the prose poem masterpiece, "?Aguila o Sol?" "Eagle or Sun?"

from "The Poet's Work"

VIII
I write on the glimmering table, my pen resting heavily on its chest that is almost living, that moans and remembers the forest of its birth. Great wings of black ink open. The lamp explodes and a cape of broken glass covers my words. A sharp sliver of light cuts off my right hand. I keep writing with this stump that sprouts shadows. Night enters the room, the opposite wall puckers its big stone lips, great blocks of air come between my pen and the paper. A simple monosyllable would be enough to make the world burst. But tonight there is no room for a single word more.

(translation by Eliot Weinberger)
Posted by Unknown at 11:49 PM No comments: 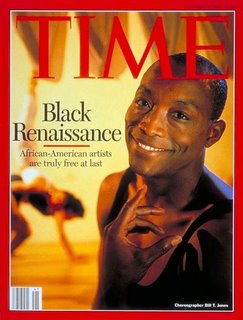 The great dancer's April 28, 2006 keynote address on Culture and the role of the Artist in Society to the Tides Foundation (full text available on "Bill's Blog")


I desire to be no slave to fear, to be clear in thought and action, to be compassionate and, yes, to be safe, loving and loved. I want to hold up my end of the
social contract - to be an effective citizen. And you?
Posted by Unknown at 1:41 PM No comments: