The Darkness around us

I've been thinking about writing something about the assassination of Doctor George Tiller, and how terrorism seems to work (Dr Tiller's clinic is closing, getting an abortion is becoming more difficult, other doctors are nervous, and some medical schools are not even teaching the procedure anymore).

Then today, a racist, anti-Semitic white supremacist, walked into the National Holocaust Museum and started shooting.

I refuse to give him any more publicity by writing his name here. 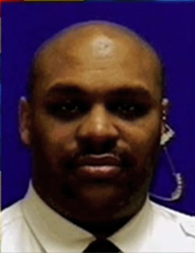 I will, however, name and pay homage to the guard that was killed, Stephen Tyrone Johns (photo at right), who had worked at the museum for six years. My thoughts, prayers, and condolences go out to his family. (I'd also urge everyone to actually NOTICE museum security people and other 'invisibles' who surround us everyday, keeping us safe, cleaning up after us, stocking the shelves around us, etc)

I've mentioned before to friends how disturbed I am about a vibe I feel permeating the air in the United States right now (and I'm not the only one apparently). The often unrelated-to-any-fact attacks on President Obama. The wild bleating by the right wing against Judge Sotomayor. The constant whipping up of "the base" (perfect word there, 'base'). The increasing echo chamber of cable 'news' where the daily meme gets repeated from one show to another, with the same old faces recycling the same tired phrases, yelling and snipeing at each other. It's becoming very frightening.

The Rough Beast of Yeats' Second Coming comes to mind:

The darkness drops again but now I know
That twenty centuries of stony sleep
Were vexed to nightmare by a rocking cradle,
And what rough beast, its hour come round at last,
Slouches towards Bethlehem to be born?

I knew that things would be 'interesting' during the term of our First Black President. But now, with this country's long history of violence, and (mainly right wing) terror -- and the lack of focus on it for the past eight years (as well as how much certain people screamed when the FBI issued its report on it, as if it were some chimera, and not a real concern) -- I have the uneasy feeling that Pandora has cracked that box open once again.

I hope and pray that I'm wrong. But sadly I feel that we are at the beginning of a period of genuine sadness for this country. We must call both these acts 'terrorism', and focus our justice system on it with increased intensity. Such horrors will happen again and again until we collectively decide to chain the monster up again. 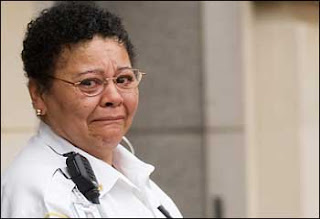 Colette Garrido is a guard with Wackenhut Services Inc., which provides security at the U.S. Holocaust Memorial Museum. Washington Post photo by Marcus Yam
Posted by Unknown at 9:42 PM