In the first hearing on the government’s justification for holding detainees at the Guantánamo Bay detention camp, a federal judge ruled Thursday that five Algerian men were held unlawfully for nearly seven years and ordered their release. 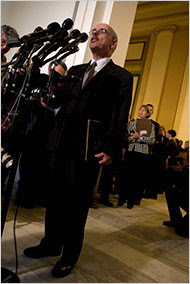 Representative Henry A. Waxman of California ousted Representative John D. Dingell of Michigan from his post as chairman of the influential Committee on Energy and Commerce on Thursday, giving President-elect Barack Obama an advantage in his plans to promote efforts to combat global warming....

Besides seating a committed environmentalist as head of the energy committee, the vote also removes one of the auto industry’s best friends from a key leadership post — further evidence of how much power the American car-makers, whose executives have been pleading for federal money, have lost in Congress. 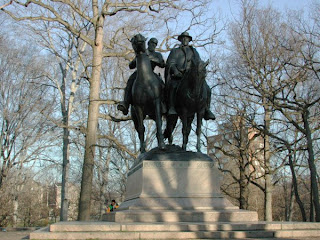 Every January, descendants of Confederate soldiers gather in Wyman Park to march under the banner of the Confederacy, sing "Dixie" and lay wreaths at the monument to Robert E. Lee and Stonewall Jackson, legendary generals of the Confederate States of America.

And afterward, for 20 years now, everyone has gone across the street to the Johns Hopkins University for coffee and refreshments, with some of the 200 descendants and observers still wearing the uniforms of Confederate re-enactors and carrying the flag. But next year will be different.

Hopkins has informed the Maryland divisions of the United Daughters of the Confederacy and the Sons of Confederate Veterans that it will not rent space to them. The Jan. 17 event is scheduled for only a few days before the inauguration of the nation's first African-American president. The university received complaints after the march last January and says that it no longer wants to see the Confederate flag flying on campus....

(And in case you're wondering why Baltimore has the world's largest double equestrian statue, depicting two Honored Sons of the South, a bit of history: Maryland was a slave state, Baltimore was home to more than 2,000 slaves, and the city was quite the font of Southern Sympathy during 'The Late Unpleasantness', and the first blood of the war was shed here -- by a black man, Nikoles Biddle, of course....)

Now to decolonize some of the MINDS on campus at Hopkins, across the US and elsewhere...That will be some real change!
Posted by Unknown at 2:24 PM