While you were voting.... 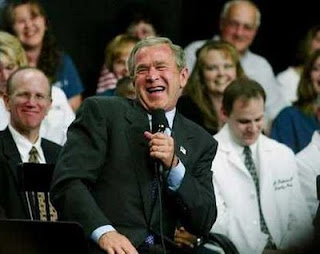 It seems obvious that the Bush administration is determined to be evil to the end: not only have they saddled their successor with a quagmire of a war and a wreck of an economic system, this article in the Washington Post notes that they also wish to gut a number of rules and regulations before Dick and Dubya leave office, further tying the next president's hands.

The White House is working to enact a wide array of federal regulations, many of which would weaken government rules aimed at protecting consumers and the environment, before President Bush leaves office in January..... would help clear obstacles to some commercial ocean-fishing activities, ease controls on emissions of pollutants that contribute to global warming, relax drinking-water standards and lift a key restriction on mountaintop coal mining.

Once such rules take effect, they typically can be undone only through a laborious new regulatory proceeding, including lengthy periods of public comment, drafting and mandated reanalysis....

House Speaker Nancy Pelosi recently visited us, and my partner decided not to attend, in part because he didn't want to 'slip' and tell her how upset he was over her decision not to impeach George W Bush. It took me a while to get around to agreeing that impeachment proceedings should have been seriously considered by the House. It now seems obvious that, for the sake of the nation, our Constitution, and our future, throwing the bums out truly was the way to go.

We all need to closely watch the current administration from now until the moment the next president takes the oath of office in January 2009. I wonder, for example, who will get a traditional end of year/end of administration pardon?
Posted by Unknown at 5:20 PM