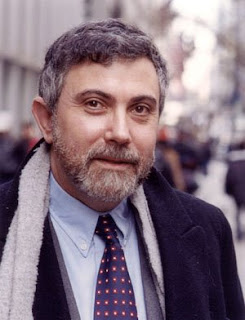 Heartiest Congratulations to economist and NYTimes columist Paul Krugman, Winner of the 2008 Nobel Prize in Economics! (Now all you need to do is become Governor of Maine and it's on to The West Wing!)

Although Krugman's selection is based on his economic theories (explained here and here), considering his high profile as a liberal public intellectual , the choice, combined with the selection of Martti Ahtisaari, Former President of Finland, as the Peace Prize winner for his work as “'an outstanding international mediator' whose efforts “have contributed to a more peaceful world and to ‘fraternity between nations’," strikes me as also being yet another needle jabbed at the Bush Administration from Sweden.

So, since the Stock Market soared today, thanks to the global embrace of...well, Socialism, actually..., is it time to pop the champagne and move on to the next crisis? I don't think so. It took a while to get into this mess, and it will take some time to get us out. Now is the time for all of us to take some deep breaths and get ed-u-ma-cated.

There have been a number of places to find good, solid information about what's going on in banking, housing, and on Wall Street lately. Here are a few I've found particularly enlightening. Some can be relatively long and complicated, but since we're going to be in for one hell of a time for at least the first two years of the next president's administration, we have some time to savor them. Also considering the artificial 'sweeteners' needed to pass the Bailout Bill, when we were threatened with nothing less than The Apocalypse, perhaps its best that we try to slow down a bit and actually consider what we should do next.

Paul Krugman's Blog at the New York Times (Wonder what he's going to do with Mr Nobel's $4million in prize money?)

The Brookings Institute on the US Economy (Full Dislosure: As a fresh-out-of-college Poly Sci major, I lusted after a job at Brookings, but lacked the self-confidence to go for it!)

Salon's "How The World Works"

Although we are on opposite sides of the politial spectrum (he thought Congress should eliminate the Capital Gains Tax, for example), I have a lot of respect for the personal finance tips of Dave Ramsey.

(Cartoon from The New Yorker)
Posted by Unknown at 5:36 PM