Out of the [Black] Closet

Two recent events in LGBT world have caught my eye because they involve us African-Americans, the often 'forgotten color' in the Rainbow Flag.

First New York Governor David Patterson announced a directive recognizing gay marriage in the state. He did it while revealing that he and his siblings were often watched by a gay couple, "Uncle Stanley and Uncle Ronald." 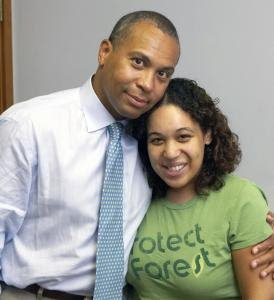 Then, Massachusetts Governor Deval Patrick (our NEXT Black President?:) announces that his 18 year old daughter is a lesbian, and she'll be joining him at Boston's Pride Parade. "I think when Katherine started to memorize all the episodes of 'The L Word,' there was some hint that maybe she was sending us."

Although in New York reaction has been mixed, Ladies and Gentlemen, all I have to say is: get over it. The future is here.

Being Black and Gay has often been like living in a velvet closet. Growing up, 'everybody knew' (or suspected) someone who was gay or lesbian. We all had 'spinster aunts' living in "Boston Marriages" or single older uncles. Or married uncles with amazing taste in fashion and style (as a story my sister tells about one of my mother's brothers with a penchant for silk dressing gowns with matching slippers attests). Drag Balls in Harlem were legendary all the way back in the '20's, and a number of Blues Women (Ma Rainey, Bessie Smith) were as open as one could be about their preferences for women. One of my heroes, Billy Strayhorn, lived a life just as described by Richard Bruce Nugent, "You just did what you wanted to do. Nobody was in the closet. There wasn't any closet."

No one ever talked about this. You were 'safe' if you kept things to yourself. The idea of being "Out Loud and Proud" was unheard of. Figures deemed too controversial (Bayard Rustin) were threatened with exposure -- by other black people. There was, and remains, a policing of sexual orientation.

Bravo to the younger generations for 'just not having it,' standing up and being out. Bravo especially to Governors Patterson and Patrick for breaking 'the family silence.' I recognized myself and the Other Half in Gov. Patrick's "Uncle Stanley and Uncle Ronald." It was our house that all the younger nieces, nephews and cousins wanted to come to for cookouts (we had the biggest yard and I'd put them to work making their own kebobs to grill). Our nephews come over to play on our computer. And when The Other Half and I couldn't make his family reunion (he wasn't feeling well and didn't go), all the reports we got back were of people asking "Where are they?" "Why didn't they come?" "We miss them!"