Sorry for the long hiatus! In addition to general 'busy-ness' we're having some problems with phone/DSL service at home, limiting the amount of on-line time to what I can squeeze in at work. I miss my nightly blog rolling! Oh well...while it may be debatable that 'You can't fight City Hall', it is VERY true that fighting the phone company is pretty much a no-win situation.....

A quick tour 'd horizon of some recent items that have caught my eye: 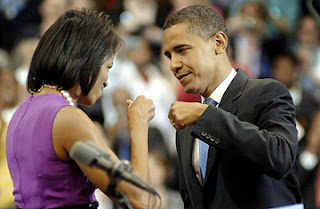 "'Fist-Bump'-O- Mania" hits the media. And it's called 'Dap' un-down-with-it (white) people! A 'Fist bump'? Plu-eeze....At least the hometown paper got it right!

Two articles (from AP via Yahoo and closer to home, the Baltimore Sun) on how younger people view Obama's rise (Oh! to be 16 again, and be able to say, "If he becomes the president, I can't imagine that there'll be racism...." The Optimism of Youth!
Posted by Unknown at 11:47 AM