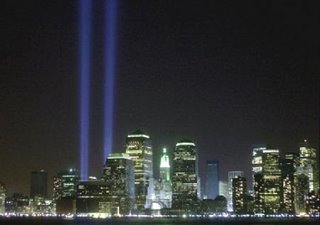 I still find it extremely difficult and painful to see some of the images of September 11, 2001

...I remember being haunted by the image of the collapsing towers, seeing it over and over again as I closed my eyes to sleep at night (it haunts me still)

...I remember going to a church on the way home for a service/meditation session, where people were able to talk about what they were feeling

...I remember making a point of stopping by a carry-out run by Middle Easterners that night to show I didn't 'blame all Muslims' nor was I afraid of them

...I remember the odd quiet of our city, of all cities, for days afterward

...I remember the clear blue skies of that week

...I remember how greatful I was to hear from friends, family, and loved ones who survived

...I remember the shock I felt at how close some of them came to not being among the surviors

...I remember how we all tried to act 'normal' and carry on with our day that day, and in the days afterward, and our attempts to avoid talking about it

...I remember the moment I had the sad realization that the US was going to attack someone for this

...I remember the growing unease at seeing all the American Flags sprouting up -- not that I
'hate America' but because I knew how often political troglodytes wrap themselves in the Red White & Blue

...I remember my first post-9/11 trip to New York, and recalling a comment of someone who lived there as I looked toward the southern tip of Manhattan: 'There they aren't'

Our President's urging in the days after 9/11 that we carry on -- even to go shopping! -- was astoundingly wrongheaded. I still think we need to mourn, even to the point to having an official day of mourning and rememberance as the Spanish did after their trains were bombed. We suppress our feelings of loss and grief at our peril, and I feel that we still have not honestly reflected on the deeper meanings of what happened to us and what we lost that day. As well as what we've lost since that day by enlarging our response to the attacks to the point of dangerous insanity by invading Iraq, arresting innocent people, relying on torture to extract information, expanding the powers of the Executive Branch, playing the Fear Card in order to win elections, wiretapping and spying on our own citizens, and calling anyone who disagrees with these moves 'appeasers,' the 'cut-and-run crowd,' or un-American.
Posted by Unknown at 10:02 PM

I have many of the same recollections, but also agree with you. The call to get back to "normal" was premature. Normal still doesn't exist.