A Death on My Street

I can't stop thinking about blood.


This is how the local paper first reported the story:

From the Baltimore Sun 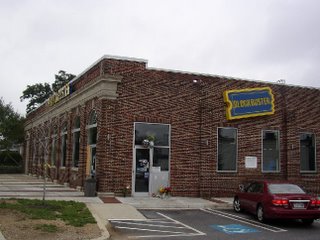 The manager of a North Baltimore Blockbuster was fatally shot last night in a robbery attempt after two gunmen entered the video store, city police said.

The victim - Antonio Gilmore, 37 - was pronounced dead at Johns Hopkins Hospital shortly after the 8:30 p.m. shooting, said police spokeswoman Nicole Monroe. He was the brother of a Northwestern District police detective, Garcia Gilmore, she added.

The gunmen entered the store in the 600 block of Homestead St., announced a holdup and then fled after the shooting - apparently without taking anything, Monroe said.

No customers appeared to be in the store at the time of the shooting, Monroe said. But she declined to say if other employees were present.

I was one of those witnesses.


I was walking home after a visit to my grandfather when a group of young kids, the oldest perhaps 7 or 8, ran past me saying 'they just shot that man!' Confused, I kept walking, only to have another, slightly older -- around 10 years old maybe -- young man come up to me and ask, "Do you have a cell phone? They just shot this man." "What man?" I asked. The young man took me into the video store, and there lying on the floor behind the counter was Antonio Gilmore.

Blood. I don't want to belabor the point, but I can't stop thinking about blood.

The right side of his face was bloody. Blood had matted his hair and under his head on the floor. Blood was bubbling out of his mouth. His left eye was wide open, staring up at the ceiling. Blood on his left cheek. Blood.

Two other people either were in the store then, or came in after me, I don't remember. I remember sending the young man to the nearby grocery store to get their security guard to call the police. I felt for Antonio's pulse at his wrist and at his neck. Dialed 911 -- or some number ending in '11' and got transferred to 911 -- and called it in. The store assistant, a 20-something young man with braids, came out of the back room looking vacant and in shock and said that he'd called as well. "I came to work here to get away from this shit," he said.

Although Antonio Gilmore had been working for Blockbuster for almost as long as my partner and I have lived in our neighborhood, I can't honestly say that I knew him well. We all knew him as 'the video store guy', and had brief, cordial conversations with him whenever I went in the store. He'd been working for them since before the store moved from 5 blocks from our place to their new location about a year or so ago 3 blocks away, directly up the street from us. There was a period when I didn't go in, out of protest over the chain's stand against Martin Scorsese's 'Last Temptation of Christ', and my visits to the store became fewer with the advent of NetFlix.

Still, I went in from time to time, and Antonio Gilmore was a fixture in the neighborhood, one of those people you 'always see.' I would glance into the window of the store on the way home and look for him, giving myself a small moment of visual pleasure since he was a good looking, heavyset or 'thick brotha', with tight, well-oiled cornrows. Always very friendly and courteous to everyone, Antonio was a genuinely nice, decent man. He hired young people from the neighborhood, including at least one 'openly gay' young black man, didn't live that far from the store, and tried to get along with everyone. Everyone seemed to get along with him. Exactly the kind of black person one DOES NOT see or hear about in the mainstrem media -- untill they become victims of violence, sadly -- but who surround us everyday.

According to the store assistant, two young men wearing shades came in and began walking around the store. He even joked that they might rob the place. The joke turned serious when he noticed they had guns. Antonio came out of the back room and they demanded money. He walked to the front of the store, talking, trying to convince them that the robbery wasn't worth it, that the police were nearby and likely to drive by or come in at any minute, and so on. He'd walked them to the front of the store and had apparently talk them into leaving when one of the two turned and shot him twice as they ran out of the store.

We are all heroes in our own mind, I suppose, and if I had to rewrite the past I would do something heroic. As it is, I now keep thinking to myself about what I could have done, or might have done. Twenty years ago, I received Emergency Medical Training while in the Coast Guard. But that was twenty years ago. All I could do in this case was stay beside him. I held Antonio's hand and rubbed his stomach lightly. I think I said, 'hold on' but am not sure. I tried not to look at the bullet hole in the upper right hand side of his chest, or at the right hand side of his face, or at the blood bubbling out of his mouth. I wish I hadn't noticed the slight shudder he gave just before the paramedics arrived. (!Que no quiero verla! as Lorca says in his Llanto por Ignacio Sanchez Mejias)

After Antonio was taken out of the store, and the police came in to talk to everyone, I tried not to look at the blood on the floor where his head had lain, or its splatter on the cabinets, but couldn't help it. I kept returning to it, looking, staring, sometimes thinking someone should come and clean it up, out of respect, even though I knew it needed to stay there as part of the investigation. Another part of me -- the writer perhaps -- kept thinking how 'pool of blood' is such a misnomer. 'Pool' conjures up images of pleasure, of a cool dip in the summer, not the coagulating reddish mess I found it difficult to tear my eyes away from.

there next to the counter, with its prominant guns pointed at the viewer. Although I like 'action movies' as much as anyone else, as I've gotten older I've had increased respect for films that have attempted to show the ugliness of violence, from The Wild Bunch and Bonnie and Clyde in the 1960s to Cronenberg's recent, excellent, A History of Violence. It is not pretty and shouldn't be considered so. I remembered how cinematographer and director Ernest Dickerson objected to the addition of a gun in the poster for his film Juice back in 1992, because one of the points he wanted to make in the film were the consequences of what happens everytime a gun goes off.

Although we are a majority black city, it was odd to see how white our police force remains. And while the black officers and detectives seemed more of a mix of types, the white ones seemed to fit a particular mold or image, with their 'crew cut' hair and Marine/Military bearing.

Also, considering how the 'CSI' franchise has proven to be so popular, it was interesting to hear the police in the store complaining about our local crime scene people. Witnesses were in the store for at least two hours before being taken downtown to talk to investigators, and CSI-Baltimore still hadn't shown up by the time we left. The other cops complained about previous latenesses and also their general level of sloppiness, with Crime Scene folks cleaning up the area rather than looking for evidence.

HBO's 'The Wire' gets the look of the Baltimore City Homicide squad room exactly right. I also saw 'the board' across the room, made famous on our other locally set crime show, 'Homicide: Life on the Streets.'

I wish I didn't know these things first hand.

It seemed odd to me that there were children's toys as well as magazines and a TV set in the witness waiting room at police headquarters, I'm not sure why. Someone had written "I don't know shit" in crayon on the wall of the waiting room. While we were waiting to be interviewed by detectives, the local Fox channel carried the story of the shooting, including the news that Antonio Gilmore was dead. Tears filled my eyes, even though I'd overheard one of the officers on the scene say he's 'been pronounced' before we'd left.

My partner and I have lived in the Waverly section of Baltimore for a long time, over ten years. We've weathered some rough times here: our apartment was broken into, our neighbor found someone pissing in our yard one afternoon, one guy with a serious drug habit broke into about a half dozen cars in the area one weekend. We've survived the loss of the Colts and a grocery store and dealers on the corner, to now and the arrival of a new, larger, grocery and a trendy YMCA, Habitat for Humanity renovating houses around us, and a rise in housing prices. The neighborhood remains a mix of ethnicities and orientations, the "United Nations of Waverly," and is 'on the come up.' We like it here, in part because there remains a bit of a small town feel on our block, just a few blocks from major city streets. This has shaken us, saddened us, and made us want to hold onto each other and our area and the fragility of life even more.

PS: The four carnations mentioned in this fuller story published on Saturday are mine,
left when I was on my way to work Friday morning.
By Saturday morning they had blossomed into bunches of flowers and balloons left in remembrance outside the store. 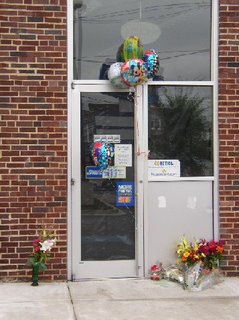 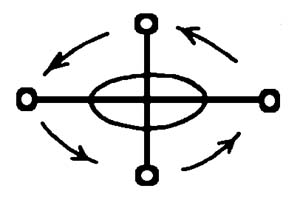 Dawn, Noon, Sunset and Midnight, the spiritual stages of life as expressed by the Kongo People of Zaire. (Dawn for birth, Noon the flourishing of life, Sunset the end of life, Midnight the underworld where those who have lived well remain until they are reborn, in the Dawn, as the next generation). "Four Moments of the Sun" for Antonio Gilmore.
Posted by Unknown at 8:36 AM

As a friend of one of the family members, I wish to thank you for your respectful view of this horrible situation. Reading your words brought tears to my eyes and the symbolism of the carnations was most moving. Thank you, thank you, thank you and I am grateful that a caring soul such as yours was present as Antonio's spirited transcended from this plane to the next. May your spirit be blessed.

Reggie,
I am truly speechless--typeless...but I had to wipe away the tears as I praised God for sending you to cross Tony's path on that evening. Words can not express my gratitude for this amazing article and your heroism during that time. I am blessed to be a part of the Gilmore family and will share this with them. We can look past the graphic depictions and smile at the impact that Tony's life had on the Wavery community. Continue to wear your "wings"...

Hey Reggie: Wow, man. So much to take in and deal with. Time heals all. Stay strong.

Thanks to everyone for your comments, particularly those who knew Tony and his family. I didn't make the candlelight vigil until after it was over and people were standing around and talking...to be honest I'm not sure if I would have gone or known what to say to anyone. I see the store is open now, with a police/security presence very evident. I suppose one day I'll force myself to go back in there, but for now I still really can't do it.