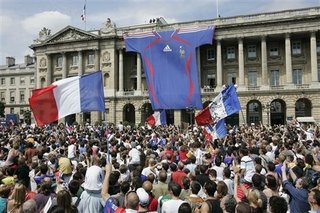 Fans wave flags in front of a giant jersey of the French team which hangs on the front of the Hotel Crillon in Paris, Monday July 10, 2006. France was stricken and shamed by Zinedine Zidane's brutal exit from soccer's biggest stage, yet the nation's president proudly embraced the favorite son, and masses of fans appeared to forgive the national hero who carried his team to the World Cup final, even if they didn't bring home the trophy. (AP Photo/Michel Euler) (http://fifaworldcup.yahoo.com)


As if playing in the World Cup final wasn’t pressure enough...(f)or France, there’s the spectre of Jean Marie Le Pen, the leader of the extreme right-wing National Front and candidate for the presidency, who complained that the French national team, with its 16 nonwhite players, didn’t resemble French society as a whole. “Perhaps the coach exaggerated the proportion of colored players,” he told L’Equipe. “The French don’t feel totally represented, which explains why the crowds are not as supportive as eight years ago.”
http://stevegilliard.blogspot.com/2006/07/world-cup-open-thread_09.html

"That’s pretty serious. He’s the type of person who’d turn on the television and see the American basketball team and wonder: 'Hold on, there are black people playing for America? What’s going on?'

"When we take to the field, we do so as Frenchmen. All of us. When people were celebrating our win, they were celebrating us as Frenchmen, not black men or white men. It doesn’t matter if we’re black or not, because we’re French. I’ve just got one thing to say to Jean Marie Le Pen. The French team are all very, very proud to be French. If he’s got a problem with us, that’s down to him but we are proud to represent this country. So Vive la France, but the true France. Not the France that he wants." 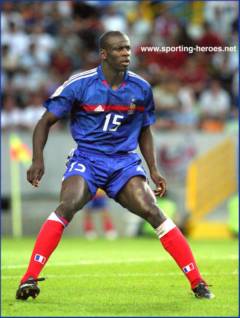