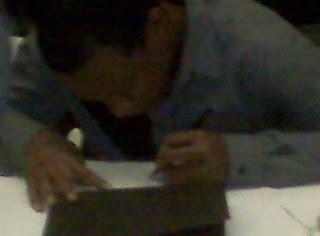 Attended a conversation between artist/photographer Hank Willis Thomas (my super-fuzzy photo of him signing copies of Pitch Blackness, at left. Check the Johns Hopkins link below for a much better look at him!) and at the Baltimore Museum of Art last night -- and also attempted my first Live Tweet from the event as well! Visual artists fascinate me, how they turn ideas into images, how they 'speak' in colors and textures. Thomas has been in residence at Johns Hopkins this semester, and the discussion was very good. Some quotes from the evening I found/find particularly fecund, like his use of 'appropriated' images from advertising and considers himself a "visual culture archivist" when doing so because "certain things can only be said by re-presenting them...how do I make this (ready-made) image my own?"

"I didn't realize I really wanted to BE an artist until after going through ten years of art school. Up to then I was just figuring stuff out."

And my favorite line of the evening: If he were stranded on a desert island "I would make art out of sand. Sand is infinite..." 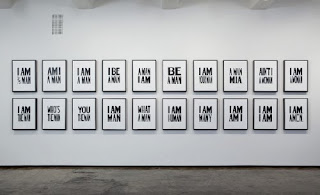 As a poet of course I was particularly fascinated by his explication of the "I Am A Man" series, based on the famous placards from the 1968 Memphis Sanitation Strike -- and how it should be read. I mentioned after the talk that I had read the texts first image upper left, next image lower left, back up to the second image on the first line...up and down all the way across. He presented them from to right across the first line as a history of the way blacks have been looked at (3/5 of a man, are we men?, Ain't I a Woman coming into the picture with the rise of the Woman's movemnt, etc) with the second row of texts, some of the popular riffs on that text, like 'I Am The Man' or 'What A Man') "reading like a poem." The final image "I Am. AMEN." ends the work with a statement of how we all want to be seen. 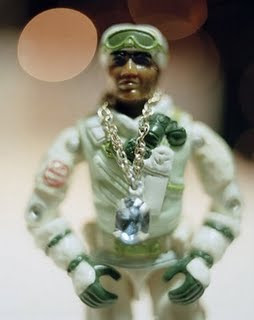 One of Thomas' projects, on display in Baltimore until the end of November is "Winter in America" a short film he did in collaboration with Kambui Olujimi uses GI Joes to dramatize the murder of his cousin Songha Thomas Willis in 2000 (can be seen by clicking 'The Film' under the 'Winter in America' link on his website). It is disturbing, sad, powerful, and very moving, and does indeed make you think about the role violent 'play' might have in real violence.

Henry Willis Thomas will be doing one more event before he leaves Baltimore, a Community Salon where he'll discuss his participation in the Artist-in-Residence Program at the Johns Hopkins on Saturday, November 14, 2009 (3:00 – 5:00 pm) at Galerie Myrtis (2224 N. Charles St). Those in the area should try not to miss it. 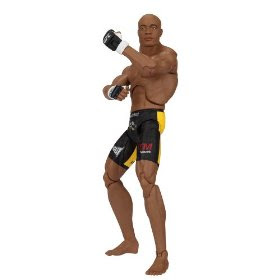 Interestingly enough, and speaking of violent play....Just in time for the Holidays (thanks to the Bronze Buckaroo), I've learned of other Black 'action figures' recently, like the figure of Brazilian superstar Anderson "The Spider" Silva here, one of a series of Mixed Martial Arts Figures now on sale. I am old enough to remember there being NO black or brown action figures (aka "Dolls for Boys") when I was growing up, so items like this still amaze and fascinate me. 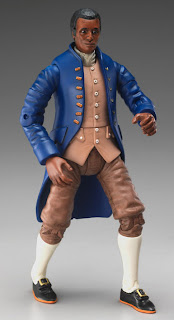 Even more amazing is this set of
History In Action Toys, featuring past achievers Bessie Coleman, Matthew Henson, and the recently blogged-about Benjamin Banneker, complete with almanac and compass!

And finally, plugs for other kinds of action figures, and members of the "Harris Family Extended": Thomas Allen Harris, who I was fortunate enough to meet recently in Austin Texas, and whose film Twelve Disciples of Nelson Mandela can be seen on PBS stations around the country, (he talks about the film here); and vibraphonist Stephon Harris, whose 1999 album gives this post its title. Click on the album cover to enjoy. 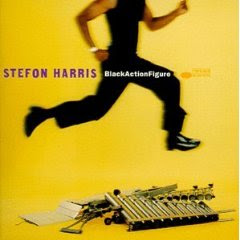 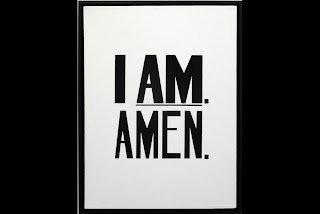 Anonymous said...
This comment has been removed by a blog administrator.
4:34 AM

Anonymous said...
This comment has been removed by a blog administrator.
8:04 AM