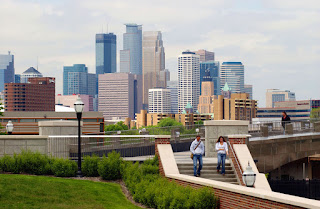 (photo, The University of Minnesota)

Back from a whirlwind trip to Minneapolis, Minnesota. I guess if Garrison Keillor can come to Baltimore, I can go to Lake Woebegon!

My first time there, and I took an immediate liking to the place. What is it about some places that draw you (me) in automatically? Well, attractions for me....Minneapolis is an Arts town, with a nationally known museum (The Walker), Theater (The Guthrie) and literary arts center (The Loft). And as for music, we all know about it's other favorite son, Prince. I was also drawn to the interesting architecture, general 'walk-ablity' and the feeling of safety on the streets -- and the great food (another visit to Hell's Kitchen is #1 on my return trip To Do List). There's also something (in addition to the chill) in the air there that felt relaxing and even welcoming to me. Quick though this visit may have been, I enjoyed being there, and am eager to return and explore further.

As others pointed out, folks there are not exactly as outwardly friendly as they are here below the Mason-Dixon, but they're not mean or rude. Just reticent or "shy" as Mr. Keillor would say. Get them started, however, and they seem quite ready to talk: we had a very interesting conversation with the van driver on the way to the airport as we left about Minnesota politics, the job market for teachers there, and his support for Barack Obama, among other things.

One thing that struck me immediately was how African the city is! Starting with the support staff in the airport, I was amazed at the number of East Africans I encountered there. 2000 census figures show an 18% black/African American population in Minneapolis (versus a 3.5% total in all of Minnesota). I am not entirely sure that this figure conveys the range of African immigrants there (Africans in America), as opposed to those of us who call ourselves/are now called African-American. In the Twin Cities area there's an African newspaper based in Minneapolis, Mshale, at least a dozen African restaurants, and an Afrifest in August. The Walker also sponsored an art exhibit "Minneapolis and St Paul are East African Cities," by artist Julie Mehretu. I also note that the city's website offers information in Spanish, Somali, and Hmong. And as for "the Other part of me', the Twin Cities hosted the third largest Pride event in the US in 2007.

• Minorities and racially diverse immigrants provided 100% of the city’s gain in people.

• Minneapolis has the largest population of Black or African American (68,818), American Indian, (8,378) and Hispanics, (29,175) in the state; and the second largest Asian population in the state.

• The Hispanic population grew by 269.3%, the largest percentage increase for a minority group in Minneapolis.

Who knew!? Now I'm VERY curious about this town, and how the traditional Midwest and African and other cultures interact and mix (or don't). 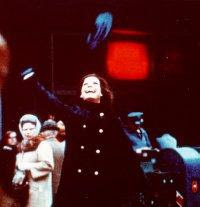 Too bad Mary Tyler Moore isn't still working in the newsroom there to do a special report!
Posted by Unknown at 5:06 PM