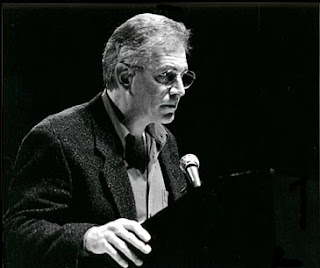 As Octavio Paz notes, the poem is alive only when the reader opens the book; until then it is nothing, it is waiting in the dark. The poem then is not some self-contained, isolated, self-sufficient object, but something that comes to be in a site that is social, contingent, and indeterminate. It captures and reconfigures time, but it remains at time's mercy, as we all do. Yet, supreme paradox, it also outlasts. As the great Chuvash poet Gennady Aygi once wrote in Stalinism's shadow, "Drive [poetry] out the door, it comes back through the window." That elusive thing, poetic truth, outlasts the demagogues, corrosive misrule, and the lies of power. Certainly today, with the values of our republic and our constitution under siege from within, with a regime bringing shame upon this nation and its people and untold death and destruction to our young and to countless others, and to the Earth itself, it is essential to continue to propose an alternative space and an alternative conversation, many conversations in fact, free to circulate in that space and celebrate otherness and difference and free to insist upon the crucial importance of the artistic imagination in its eternal resistance to the given and the inhuman. Such conversations or exchanges take place "between innner and outer worlds," in Wallace Stevens' words, "never certain, never fixed."

Michael Palmer, from "Time's Mercy" (Acceptance speech on recieving the 2006 Wallace Stevens Award from The Academy of American Poets)
Posted by Unknown at 9:19 PM