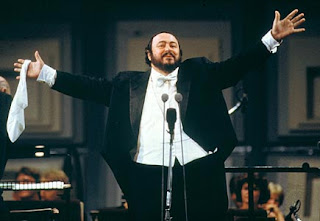 Behind the huggy-bear, "I'm just a happy, regular overweight Italian guy who loves to sing" persona was a great and serious artist
The Washington Post

A fond farewell to the Great Tenor (and hero to 'men of size' everywhere). However, as the NY Times assessment of his career indicates (it’s hard to avoid feeling that he never completely fulfilled his potential, that he squandered some of his awesome talent by letting his enablers turn him from a hard working artist into an overindulged and sometimes clownish superstar), 'The King of the High C's' career does bring up an interesting dichotomy: Does one strive to be An Artist or A Star?

Pavarotti's name is synonymous with opera for many people, and millions watched or listened to him, and purchased his recordings who probably didn't understand a word he sang and had never heard opera before or since. Is that 'bad' in some way, to be a 'popularizer'? In a way similar to the late Beverly "Bubbles" Sills, he managed to introduce people to Art. We hope that some, perhaps small, portion of them continue to be enthralled by it.


Placido Domingo is doing more within the opera world, particularly thanks to his resuscitation efforts in Washington DC....and okay, someone should have said 'no' to Yes Giorgio, and he probably shouldn't have been as indulged as much as he was...but what a Voice! His 'showstopper' Nessun Dorma made me cry (again) this morning....And I wouldn't give up some of his 'High Culture meets Pop" duets for all the world....

Although fading memory has caused me to forget the specifics, in the early 90's (1992 or 93), Pavarotti released a new CD, the title of which escapes me. The national radio advertising was produced in upstate New York where I lived, and yours truly was hired to provide voiceover for those commercials. It was the project that earned me union membership into the American Federation of Television and Radio Artists (AFTRA). I've always had a special fondness for him as a result.

I am so stunned by the incongruity and cheesiness of Pavarotti singing with James Brown and Barry White (backed by a gazillion strings and white girls going OoooOOoo) I have no idea whether I liked it or not. Wow. I had no idea!!

His voice will be truly missed.

A Bernie/Pavarotti duet! Who knew?:)

And yes, the 'cheese' factor went *waay* up in the later stages of his career, as he hit 'world superstar' status. You watch these clips and think 'Oh No!...but then maybe Yes...but then again no...or but well..." Very odd. I can't imagine any other opera star doing this kind of thing!

Expect a lot of reissues and Special Sales as companies hit the vaults to reissue recordings...