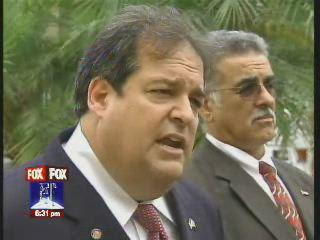 In 2001, Cornelius Eady published a great book of poetry, Brutal Imagination. Written in the persona of the imaginary black criminal Susan Smith invented to take the blame for the drowning death of her children, the book also takes on the voice of other African-American stereotypes (like Uncle Tom and Steppin Fetchit), and ends with "The Running Man" series, about a bookish young black man who becomes a criminal. It is one of those books of poems that is as moving and satisfying as a good novel.

State Representative Bob Allen says he was feeling nervous and offered sex to get away from a man he didn't trust.

"This (undercover officer) is a pretty stocky black guy, and there's other black guys around in the park that—you know!"

Allen said he was also frightened of the weather. So he fled to the men's room.

"I said the building is safer than staying out here, so I went back in and I sat down."

He said he offered the man in the men's room what he thought he wanted, just so he could get out safely.

"I went ahhh -- I'm about to be a statistic. You catch all kinds of people, so a legislator is like whoa! You know, especially one that's the (police union) guy of the year...this is too ironic!"


As one of those 'stocky black guys', all I can say is, "Yeah, Ironic. That's the word I was looking for."

When called, I come.
My job is to get things done.
I am piecemeal.
I make my living by taking things.

What a travesty.
This guy needs to come out and get over it.

I don't know Peter...Some people just seem to prefer twisting themselves up in knots to 'coming clean'/coming out. I guess they have their reasons, but...?