Too much has been happening here in the past month for me to do much blogging, but I did want to sneak in a brief post to say.... 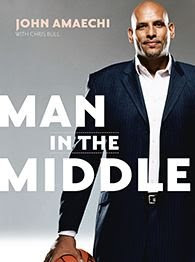 Bravo! for former Orlando Magic and Utah Jazz center John Amaechi, the first pro basketball player to 'come out' as a gay man. It is also something of an event since he is half Nigerian, and that country recently considered passing a set of truly draconian laws against homosexuality (and their Anglican Bishop, Peter Akinola, is one of the driving forces behind the growing schism in the church over ordination of openly gay priests and other 'modern' changes)

Perhaps more importantly, bravo to him for being a model fomer sportsman, with impressive philanthropic credentials in England, founding the ABC Foundation to increase young people's participation in sports, and for building the Amaechi Basketball Centre in Manchester. He's someone putting himself, and his time and money where his heart lies.

I've also been impressed in the main by many of the reactions to his revelation by current players and coaches. My own personal favorite is this one, from Toronto Raptors coach Sam Mitchell. He also makes a comment about 'tolerance' that I find particularly apt for February, and all the other months of the year:

Mitchell was asked whether he believes tolerance increases with age.

Exactly!
Posted by Unknown at 4:46 PM