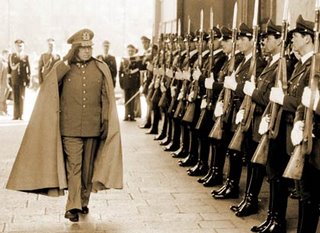 If there is such a thing as divine retribution, then tonight, General Augusto Pinochet is at the beginning of an eternal sentence of roasting on a spit in Hell.

Planner of the coup d'état that brought him to power on September 11, 1973. The cost of his term as El Supremo de Chile? 3,000 dead. 30,000 tortured. Domestic and international spying and persecution of dissenters through Operation Condor. The car bomb murder of ambassador Orlando Letelier in Washington DC in 1976. All with the support of the United States government, including the late Nobel Prize winning economist Milton Friedman ("Miracle of Chile" indeed!) and the late UN Ambassador Jeane "Right wing dictators are better than Left wing dictators" Kirkpatrick. Dispite beging the target of hundreds of prosecutions on corruption and human rights violation charges, The Generalissimo mananged to escape any form of prosecution.

If you wonder why some in South America distrust the United States, you need look no further than to our relationship with the reign of General Pinochet in Chile.

I was in Chile as 1983 turned into 1984, and although Pinochet's power was slipping, those I traveled with and I were still followed and watched "for our own protection" by non-uniformed members of the (secret?) police in Punta Arenas -- and most likely in the General's home town of Valpariso as well, where a young lady talked to me, a stranger from another country, briefly, furtively, about her fears. While a number of people in Chile showed us a heartwarming level of hospitality, it is also the case that, as Raymond Chandler wrote, "the Streets were dark with something more than night."

So no tears here, Jefe, for turning a beautiful country into a center of fear and paranoia. Too bad you didn't spend some time behind bars in this world -- but I'm sure you're getting your just deserts in the next.
Posted by Unknown at 8:37 PM

Did you see that the Washington Post editorial page was praising him and other right-wing dictators because he facilitated the free market in Chile? These people really have lost their minds, I think. Really....

What WAS the Post editorial board smoking? And how many times did Katherine Graham spin in her grave when she learned about this? Are you sure this wasn't the Wall Street Journal Editorial Board in disguise? *sigh* How sad that we live in an 'ends justify the means' world now...

Anonymous said...
This comment has been removed by a blog administrator.
7:31 PM