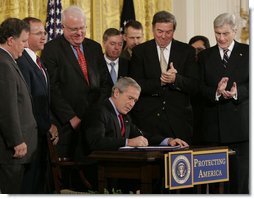 "The president can now, with the approval of Congress, indefinitely hold people without charge, take away protections against horrific abuse, put people on trial based on hearsay evidence, authorize trials that can sentence people to death based on testimony literally beaten out of witnesses, and slam shut the courthouse door for habeas petitions." -- Anthony Romero, President, ACLU

One of the many things I learned reading James A. Monroe's Hellfire Nation: The Politics of Sin in American History is this: almost every law 'reformers' have passed in order to curb some perceived 'national sin,' has turned out to have far more unexpected consequenses than those reformers could have ever possibly imagined -- and they have succeeded in expanded the role and power of the national government.

Today, President Bush signed "The Military Commissions Act of 2006" and, in the name of pursuing terrorists, kissed habeas corpus goodbye.

Secret Detentions? Sure no problem

The President says 'trust me'. He says he won't use it to toss in jail those who disagree with him (possible and 'legal' under this law). "We're going after the terrorists," he reminds us.

This new law disturbs and terrifies me. To my mind, todays signing means the terrorists have won. Our governemet has survailled us, tapped our phones, ramped up the fear levels, turned us against our better selves and our history, and have gotten us to give away basic liberties, all for the sake of some kind of 'safety.' And no one seems to care (one glorious nightly exception: MSNBC's Keith Olberman)

"The Congress just gave the President despotic powers and you could hear the yawn across the country as people turned to Dancing With the Stars." Jonathan Turley

And again I come back to Hellfire Nation. Even if we agree with these and other moves 'for our own safety', even if we think President Bush will use this law sparingly and judiciously, what about the future? What's going to happen in the next administration, or the next, or the one after that? 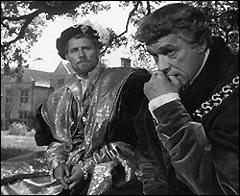 My partner and I have always loved A Man for All Seasons, and enjoyed and memorized a number of quotes from that film. This scene is one of our favorites, and seems chillingly apt for our own times:

William Roper: So, now you give the Devil the benefit of law!

Sir Thomas More: Yes! What would you do? Cut a great road through the law to get after the Devil?

William Roper: Yes, I'd cut down every law in England to do that!

Sir Thomas More: Oh? And when the last law was down, and the Devil turned 'round on you, where would you hide, Roper, the laws all being flat? This country is planted thick with laws, from coast to coast, Man's laws, not God's! And if you cut them down, and you're just the man to do it, do you really think you could stand upright in the winds that would blow then? Yes, I'd give the Devil benefit of law, for my own safety's sake!


The United States now appears to be lead by William Roper -- and he's been handed an axe.
Posted by Unknown at 11:16 PM

Reggie, this is a great post summarizing the surreal absurdity of the situation, including great cinema references, and wholly frightening--as it should be.